Analysis of the crop circle which appeared in Fosbury Wiltshire UK on July 17th 2010 reveals a sequence of mathematical constants embedded in the proportions of the harmonic sequence of hypercubes within the structure. These constants include (with accuracy):

Note the diagram below for measurements and color coding.

It is also notable that the positioning of this crop circle is perfectly oriented relative to the tire tracks running through the inner cube, such that there is a perfect proportional balance between where the tracks enter and exit the cube sides. On July 17th 2010 near Vernham Dean, Wiltshire, UK the 250ft Fosbury crop circle was sighted. While many have looked at this crop through a 3 dimensional perspective linking its geometry to the Tesseract (or Hypercube), an even more intriguing perspective is hidden within a 2 dimensional analysis of the crop.

You can look at the crop as if it were a smaller cube nested inside a larger cube with some interesting nested divisions of the faces of the external cube’s faces. This is where some of the hypercube interpretations begin and end, really. However, if you take to analyzing the projections of the cubes onto the 2D plane, you begin to see nested hexagons.

Now, if you were to nest a circle inside the perimeter of each of the INNER and OUTER 2D hexagons, this would be the same as nesting two spheres inside each cube. Where,

Now that we can see the Euler relationship down in the 2D plane with circles representing spheres, we continue to nest circles inside the perimeter of the each of the remaining 5 hexagons present between the inner and outer hexagons. We find that each of the 5 circles have diameters that divide the space between the inner and outer circles by equal 12ths. If you were to fully divide the space by circles, their diameters would be

From here we can begin to see a relationship emerge: a division of space in 12ths with a growth (or decay) rate of e.

We can further the visual exercise by repeating the pattern in either a growth or decay representation by repeating the pattern with another set of circles with each of their diameters scaled by a factor e. Outside the bounds of the analogy of audible frequencies, we can extrapolate a relationship between spheres, their diameters, and potentially their resonant frequencies.

We know that where Euler’s constant shows up, there is usually a natural growth or decay function being described that can often be measured in nature. Can this relationship credit Pythagoras for the discovery of music theory’s harmonious Circle of 5ths being yet another description of a natural growth and decay phenomena? Or perhaps this interesting relationship is one we can use to describe other physical phenomena in our 3D reality. It’s open to further investigation. 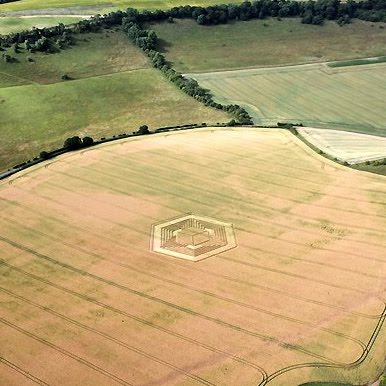 Don’t miss the next releases…

These Galactic NFTs are going quickly, so jump on our list to find out when the next release is coming, so you can be ready!